The truth behind the myth of Eurovision’s political voting 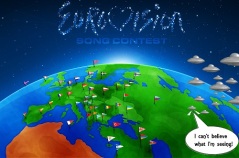 It’s Eurovision time again, that special time of year when cheese is on the menu all over Europe. If you don’t watch it, and especially the semi-finals where so many memorably bad acts go out, you’re missing out on either a massive celebration of Europop or a hilarious parade of some of the most awful songs ever, depending on your perspective. I usually view it as about half and half, but it’s never dull.

Interestingly, though, a straw poll suggests that the first thing most people think of in connection with Eurovision is political voting. “They all vote for their mates” is the general gist of the popular belief, concluding that the entire process is both corrupt and pointless, as well as implying that we are entirely innocent of such favouritism. Even allowing for a certain amount of humour and hyperbole, this reveals an impressive range of cognitive biases.

Given that the near neighbours who are most often accused of always voting for each other tend to be those who have very strong historic reasons for being rather antagonistic towards each other, it should be obvious that there’s more going on here than a simple arrangement to swap votes between friends, even without noting that there have been 13 different winners in the last 13 years.

There are clear reasons why there might be patterns of neighbouring countries voting for each other, as demonstrated by our typical interest in Ireland’s song. Countries in the same region generally like the same sort of music, and take a special interest in each other’s entries, in much the same way as football supporters always want to know how their local rivals did.

Strangely, even as a rivalry this interest can be a significant advantage in a contest of about 25 songs, based on positive votes for an absolute favourite. To get votes, a song has to stand out from the others. Quality and a catchy tune are helpful, but the most important thing is to stick in the mind. People taking an interest, even a moderately hostile one, is likely to help any song.

As well as local interest, there’s a possible mechanism for some degree of bias in the use of telephone voting. Countries aren’t allowed to vote for their own song, but in regions where there’s been significant upheaval and/or border changes in recent years, there may be a lot of people who are able to vote for “their” country, the one they identify with, because they now live in a different country. This was a substantial influence when voting was entirely through telephone polls, but juries now provide a little more balance.

Another factor that can cause assumptions of bias and collusion is the growing trend of marketing songs very heavily in certain areas in the months before the contest. To anyone who’s hearing a song for the first time, it might seem like an unremarkable example of Europop, but to those who have been listening, singing along and dancing to it for weeks, it’s far more than that. It isn’t necessary to invoke politics or even taste to explain the popularity of a song you personally don’t find particularly special.

Most of all, there are our old friends selection bias and confirmation bias. Selection bias first, and this is something I sometimes still do myself. Each country’s ten favourite songs are read out in ascending order, from tenth through to first. So by the time each top choice is announced, nine countries have been eliminated from the pool and there’s often a single song from the remainder that’s pretty clearly scoring better in the contest so far than the others.

At this point, it’s very easy to say that obviously, Lithuania will give top marks to Latvia, for example. It looks impressive when you’re right, and whenever the association between the countries tallies with your expectations it will be taken as confirmation. But the deck’s heavily stacked in your favour, as any other likely candidates (assuming a back-scratching vote) will probably have been named already to rule them out. 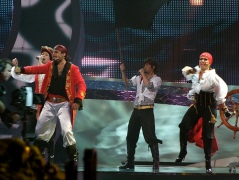 And of course, any vote will either be added to a mountain of evidence of political voting, or simply disregarded. We remember the times when Croatia gave their top vote to Bosnia-Herzegovina’s folk-style nose flutes, but not when Sweden surprisingly awarded 12 points to Malta, because one fits the pattern and the other doesn’t. Classic confirmation bias.

These factors do have an influence at the margins, and all things being equal it’s handy to have a few votes you can rely on, but it’s not the conscious back-scratching conspiracy of popular myth, and given the scale of the contest, it’s rarely going to decide who wins. More important is to have a song that’s distinctive, and particularly that isn’t tapping into the same genre as several other entries, like the usual bandwagon-jumping imitations of the previous year’s winner.

I could explain the flaws in that approach with reference to game theory, but that would be a whole different subject.