A Critic Writes: The vital significance of Third Sheep in the Nativity 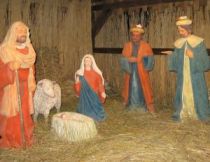 We consider that we know what makes a nativity, but do we really? Despite the apparent simplicity of the concept, it’s obvious to clever people like me that this story is a multi-layered intertextual phenomenon. There are layers upon layers, layers within layers, and layers next to layers but at a slight angle. There is nothing simple about it.

Every element of the story is vital to making it the enduring phenomenon it is. Some of these have a direct, functional role – Jesus needs parents, who in turn need transport and somewhere to stay, and no birth would be complete without people popping in uninvited and giving you impractical gifts you didn’t ask for. But other roles are far more significant and symbolic.

Ask yourself – what is the wider significance of the nativity? It is surely the story of food, drink, endless TV specials and maybe even the salvation of the world. But where do we see that demonstrated? There’s narrative and background knowledge, but actions speak louder than words. Where on the stage can we see a manifestation of the change that is being wrought by the arrival of a tiny baby boy?

Like a weight watchers advert, we can only see change by comparing the picture before and after. We need a point of comparison to see how the very nature of the world has changed. This is where the sheep come in. All the other characters who appear both before and after the birth are too involved in the events to be a reliable guide, either by proximity or angelic visitation. The sheep alone can guide us, as uncomplicated reflections of the state of nature.

It falls to the sheep to demonstrate that the world has changed from a source of terror to a joyous new creation, and to do it entirely in mime. They must be uneasy at the beginning, even in the presence of the shepherds, without quite knowing why. Then although they are abandoned as the shepherds rush to see the baby, they need to subtly grow more confident and joyful. Even Marcel Marceau would find that challenging, especially in the absence of a strong wind or invisible box.

But not all sheep are equal, and the number is very important. One sheep is just a sheep. Two sheep are a pair. Three sheep are a flock. Three is the magic number, just as in comedy. The third sheep signifies that the sheep represent a much larger group, a different kind of flock. They are us. Only more woolly, obviously.

Without this fundamental change in nature, we’re left with nothing more than a baby boy. That’s exciting for his family, but it’s not going to inspire the huge bling-filled celebration of commercialism that we understand as the true meaning of Christmas. It might leave a few Cliff Richard songs, but honestly, no one really wants that. The sheep are the ones who bring the story to life, lending it true eternal significance. The sheep are the unsung stars.

So you see, Lucy, it’s a really interesting part. Much better than playing Mary, like that snotty suck-up Abigail. Just because her dad’s on the board of governors, she gets treated like royalty…

One response to “A Critic Writes: The vital significance of Third Sheep in the Nativity”