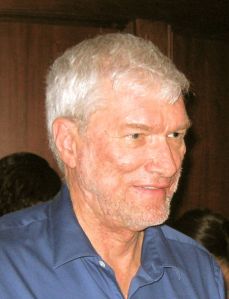 Wow, you turn your back for a moment and look what happens – Bill Nye “The Science Guy” is apparently slated to debate with Ken Ham of Answers in Genesis, Young-Earth Creationist and notorious reality-denier, and tickets have already sold out. My respect for Nye is nearly as great as my contempt for Ham, but this worries me immensely.

AiG’s press release gives a very strong impression of how Ham intends to approach this – there’s already a strong element of bait and switch in there, with the grandiose (and breathtakingly inaccurate) claim that “observational science confirms the scientific accuracy of the Genesis account of origins, not evolution”, while the actual topic of the debate is much narrower, allowing plenty of room for handwaving and flannel in the face of such underhand tactics as evidence.

The question to be debated, “Is creation a viable model of origins in today’s modern scientific era?”, is worded to allow God as many gaps to fit into as possible, but still only warrants a one-word response – possibly two, if I stretched it to “Hell, no!” But that hardly makes for a debate. The alternative is to provide chapter and verse on the many sources of scientific evidence that inform our understanding of our origins. That would take far too long, and would be a similarly bad fit with the planned format.

This is my greatest reservation – a set-piece debate, never my favourite mode of discussion, is simply unsuitable in this case. Evolution is a matter of scientific evidence, which is determined by formulating and testing hypotheses – it takes time and effort, but it’s open and rooted in observed facts. It’s not about who can appeal to emotions, raise spurious objections or simply shout the loudest. As Duane Gish showed, a total absence of evidence in your favour is no obstacle to a successful debating career if you know how to blather.

If I had to predict how this will go, I’d say that Nye will carefully set out the evidence, and Ham will simply insist that he’s wrong, based on misquoted, misrepresented and even fabricated claims about irreducible complexity, transitional fossils, human footprints in dinosaur tracks and all the other multiply-debunked topics that YECs return to like dogs to their vomit (is that Biblical enough for you, Ken?)

Even in the unlikely event that Ham suddenly begins to understand the scientific method and consider proper evidence instead of regurgitating PRATTs (look at AiG’s website for an idea of how remote that chance is), I can’t see this advancing the cause of science. At best, it gives YECs a veneer of credibility as a serious point of view to be tackled. At worst, the YECs who are present (and who Nye presumably hopes to persuade) will become more dogmatically certain that they’re right, thanks to the Backfire Effect.

Of all the people who I think might be able to pull this off, Nye has to be right near the top of the list, but I still fear that any possible positive effects are outweighed by the negatives. I hope he knows what he’s doing.